Home Entertainment and Arts The Comey Rule – Is Telling the Truth Manipulative? [Review]

The Comey Rule – Is Telling the Truth Manipulative? [Review]

The Comey Rule – Is Telling the Truth Manipulative? [Review]

Creating Your Business Name and Slogan

God “Told” Him to Quit his Job and He went Bankrupt: Why You Need the Church to Hear God’s voice

The world is fascinated by who becomes the next American President. It is hard to imagine any country whose political system is subject to more screen time, whether it be news coverage, special events, TV series or movies – both fact and fiction.

And let’s be honest, it’s because American politics is indeed, fascinating.

The larger-than-life characters, the outlandish politicking and wide-ranging perspectives on how truth can and should be told, and to what degree your faith (or lack thereof) should affect your vote is thrilling. If not startling and exhausting.

The next show taking outside punters, or ‘potential voters’ as we’re called, into the hallowed halls of The Whitehouse, is The Comey Rule.

The two-part series is about former FBI Director James Comey (Jeff Daniels), and the relationship he had with President Trump (Brendan Gleeson) during the first few months of Trump’s presidency.

Based on Comey’s book, A Higher Loyalty, it documents Comey’s handling of the Hillary Clinton email scandal in 2016, and his subsequent investigations into Russia and their alleged election meddling.

It’s the plotlines political dramas are made of, but what makes The Comey Rule compelling, it’s that it’s all meant to be true. 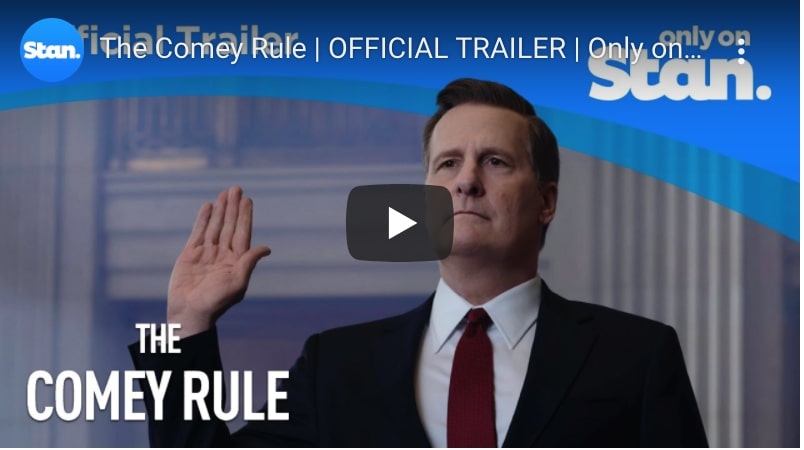 James Comey is a presented as a leader who is well loved by his staff. He knows how to give a perfect morale-boosting speech, willfully waits at the back of the cafeteria line and pays attention to employees lives in ways few other big bosses probably do. He is fiercely committed to being seen as impartial and acting with integrity, and, trying to stay true to those aims causes him the most sleepless nights.

Trump on the other hand, is presented as being wholly ogre-ish in his manner toward others. So consumed in his own achievements and presence, he’s ignorant of his own missteps and manipulation of his team. Despite the intentions of whomever is talking to him, he hears what he wants to and acts based in the information he think’s is important.

Trump is narcissistic to the point the FBI staffers develop a so-called, ‘code of conduct’ around him. Every word of Comey’s is deeply considered as he caters to Trump’s need to see personal benefits in all FBI decisions, and also tries to protect the public perception of the bureau.

The series is very clearly seen through Comey’s lens, as the battered hero of the story, but it’s a valuable think piece about how we apply facts, and the cost of telling the truth. It raises questions about what ‘election meddling’ really means: is it fudging numbers, or simply bombarding people with misinformation that affects their views?

It also addresses the use of media for political gain, and in many ways, how Trump prioritises the rule of entertainment and public relations over the rule of law he is meant to abide by.

You get the feeling Trump holds the power he does because people around him just don’t know how to deal with someone who isn’t acting according to the cultural norms of The Whitehouse. They can’t say no to the President, and have to swallow all tensions they feel to remain in the room.

Some of the nuance of The Comey Rule may be lost on non-American viewers, unless they have a particular interest in the language of politics and the American players, but its overarching narrative is one we can all appreciate.

The Comey Rule rides the line very well between what was said by politicians, what was done and what actually happened. And as fans of the genre will know, they’re not always one and the same.

The Comey Rule is streaming on Stan now.