An unflinching account of Christianity’s worst failings through history – and its greatest contributions to society – has been named Australian Christian Book of the Year for 2020.

For the Love of God: How the Church is Better and Worse Than You’d Ever Imagine, by Centre for Public Christianity (CPX) writer Natasha Moore, was awarded the prestigious title in the Sparklit Book of the Year awards broadcast from Melbourne on Thursday night (August 13). It was chosen from a shortlist of 10 impressive titles ranging from fiction and memoir to theology.

In an interview Natasha said she was “pretty surprised and overwhelmed” at the win, but was quick to point out that the book was an offshoot of a larger documentary project – a team effort of her colleagues at CPX including John Dickson, Simon Smart and Justine Toh.

Highlighting Both the Good and the Bad 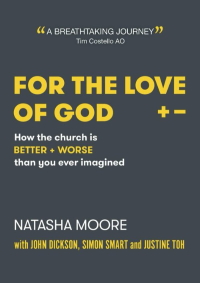 For the Love of God aims to present a full and honest picture of the church’s track record through the ages, and give readers a framework for dealing with its worst sins.

“We made a documentary of the same title,” Natasha said, “about the best and worst of Christian history.

“Christians have done all sorts of terrible things in the last 2000 years, and a lot of people are suspicious of Christian faith as a result, understandably. And we wanted to say, ‘Okay, alright, a lot of this is completely accurate, a lot of this history is really awful—and also, there are a lot of stories that people don’t know about; ways that Jesus and his teachings and his followers, actually following Him, have contributed to making the world a better place.

“People often only look at one or the other, and don’t get the full picture.

“So we made the documentary. And not everyone is a documentary person, and we had a lot of research that couldn’t make it into the screen format, so sat down and wrote a book of it.

“It has a number of stories that weren’t in the doco, as well as hopefully covering the breadth of what was.”

The Remarkable Knights of the Order of St John

When asked to share something from the book that’s impacted her the most, Natasha shared the story of the world’s oldest surviving charity: the Order of St John, or ‘The Knights Hospitaller’, from which the well known St Johns Ambulance was born.

“They were founded in the Middle East in the Holy Land during the Crusades,” Natasha explained. “They were this order of knights, but they also wanted to care for the sick, which was not a given at the time. And their inspiration was actually the parable that Jesus tells, the Parable of the Sheep and the Goats’, that has this picture of Judgment Day where Jesus is saying to people, ‘Whatever you did or failed to do, for the least of these, for the poor, for the sick, for the imprisoned, you failed to do that for me; or you did that for me’.

“And these knights, who were wealthy and strong and powerful, they cared for the sick, and they called them ‘Our Lord, the sick’. [They taught that], ‘Jesus told this story where he seriously said you have to look at the sick and vulnerable person and see them as Jesus Himself’. They took that seriously and kind of revolutionised health care to some extent, as a result.

“I just think that’s really beautiful, that this one story, changed the world.”

How Should We Deal with the Sins of the Church?

In looking at the best and worst impacts of the church throughout the centuries, Natasha said that Christians, by concluding that “the good outweighs the bad”, have grossly oversimplified the matter.

“One of the things that I want people to take away is that the ‘balance sheet’ isn’t the best way to approach this question [of whether Christianity is good or bad],” she said.

“To the extent that it’s a meaningful question, I’ve become very much convinced that the influence of Jesus has been much for the better – but I just think that if you’re someone who’s suffered at the hands of the church or of Christians, it doesn’t cancel that out.

“We really want to point people back to Jesus and say, ‘let’s measure what Christians do against the one that they claim to follow’.”

“We really want to point people back to Jesus and say, ‘let’s measure what Christians do against the one that they claim to follow’… That’s a good way to assess that, and to see what’s worthwhile about that tune. And paying attention to Him – that he’s the real deal, whether Christians have been or not’.”