Home Lifestyle Can Racism Be Stopped in the Schoolyard?

Can Racism Be Stopped in the Schoolyard?

Can Racism Be Stopped in the Schoolyard?

Australia is a diverse country, but how accepting are we of each other? A new ABC documentary series is observing a pilot program designed to change the conversation about race in a south-western Sydney primary school.

The School That Tried to End Racism is a must-watch new documentary series airing on ABC.

Marc said it’s the first of its kind in Australia.

“This is a program that has run for years in the USA, and they’ve run it in the UK, and this is the first time it’s run in Australia,” Marc said.

“It’s actually very simple. So, the word ‘racism’ is very loaded. When it comes to racism in adults, you fall into one of three categories. You’re either somebody who’s never experienced it. To you I say that’s great, I’m happy for you. The second is somebody who recognises it’s an issue but you’re afraid to talk about it. You’re worried if you talk about it, you’ll say the wrong thing. And then there’s the third group: people like me, and you grew up with it”.

The series is set in a classroom in a south-western Sydney primary school, filled with kids with different experiences of racism. It’s a fascinating, and at times, an uncomfortable watch, as students share honestly and openly about their respective cultures.

“The underlying thinking behind the series, and the academia behind it, is if you can give kids (11- to 12 year-olds) a toolkit to talk about race – what makes them different, to understand how stereotypes turn into biases which turn into prejudices – if you give them that toolkit early, the payoff later on will be incredible,” Mark said.

“Those racist ideas that permeate society will not, because suddenly we can talk about it.”

“Those racist ideas that permeate society will not, because suddenly we can talk about it,” – Walkley award winning journalist and broadcaster Marc Fennell, host of ABC’s The School That Tried to End Racism

So, will this school program be rolled out across the state? Marc said that’s something time will tell.

“The Department of Education in NSW came on very early, they were very supportive,” he said.

“This series was made with the very enthusiastic consent of the school, the teachers, the kids, and of course the kids’ parents.

“We end the series by revealing how much the kids have changed. To me, it comes down to a line I say at the beginning: ‘Advance Australia Fair‘. We’ve decided the word ‘fair’ is in our DNA, but then we have to ask ourselves the question: exactly how fair is it?

“If the program can move us to being a fairer country, then I think we have to consider it. If we learn to understand and navigate our differences better, we become a better whole as a nation.”

The School That Tried to End Racism begins tonight at 8.30pm on ABC TV and later on iView. 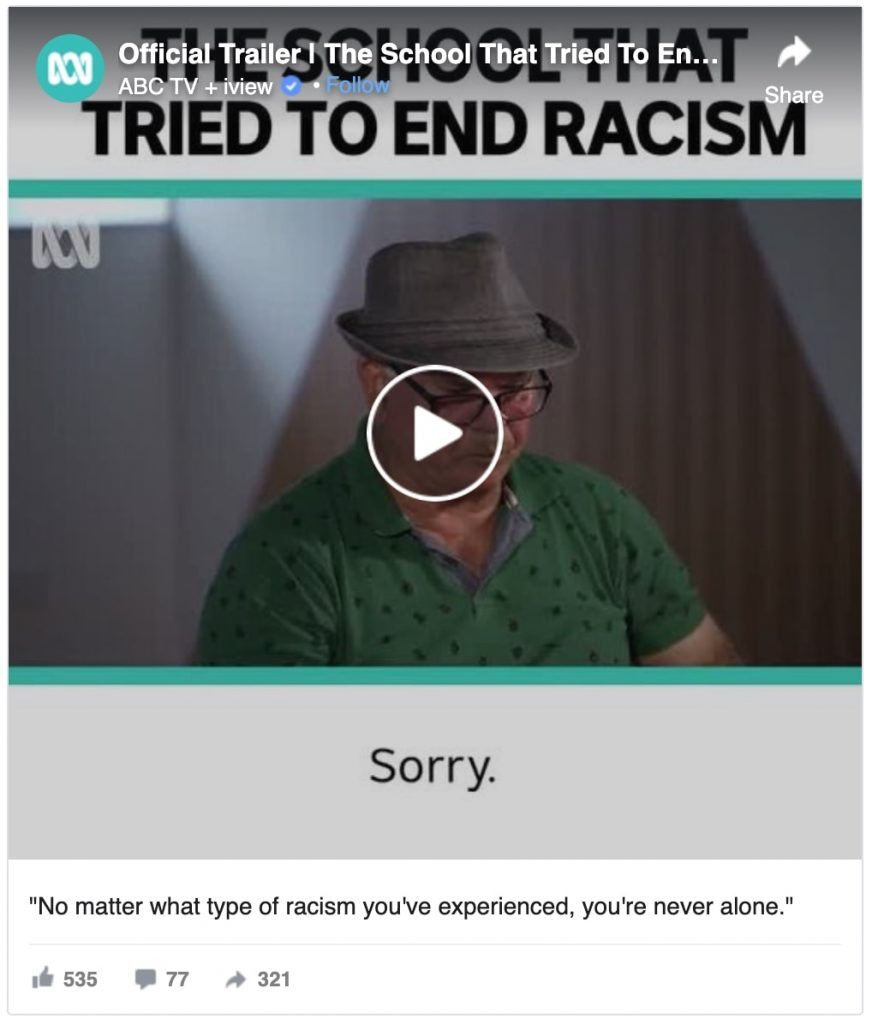 tags: articles education featured hope 103.2 racism
0
previous Cauliflower and Parsnip Mash
next Cashing In: What Blockchain Will Mean For Our Dollars and Cents
Related Posts