Home Lifestyle The Land of Dumplings and Cheese Pie: A Look into Georgian Culture with Alice Zaslavsky

Have We Moved on From Movie-Going?

Grace Is a Free Gift, Not a Free Pass

Australia is a land of many cultures and tongues, and Harmony Week is the perfect time to spotlight a culture Australians may have never have heard of such as Georgia. Former MasterChef contestant Alice Zaslavsky spent just seven years of her life in the tiny country of Georgia but, as an adult, is now reclaiming and celebrating the culture she was born into.

Georgia is a small country, located at the juncture of Western Asia and Eastern Europe, and is known for its mountainous landscapes and fresh, flavourful produce.

“It’s very much on the spice trail, it’s very hilly and green.”

Food has always played a significant role in Alice’s life – a passion which began in Georgia, with her family.

“I think I was born asking “what’s for dinner?” Alice laughed.

“My parents are academics, so we travelled a lot when I was a kid. So whenever we went to a new place, we would go to that place’s market.”

“When the Huns were coming through Georgia, they left xiao long bao behind or a version called khinkali, which are Georgian dumplings, the size of your palm,” Alice said.

At seven years old, Alice emigrated to Australia with her family and was immediately thrust into a completely foreign language and culture.

“I learnt [English] by watching Play School and The Bold and the Beautiful,” Alice laughed.

“It’s probably why my accent is two parts Australian and one part American.”

Throughout her life, Alice has developed a deep appreciation for the English language, especially wordplay, leading her to become an English teacher.

“There’s something to be said about English being your second language,” Alice said.

“It gave me a different understanding and appreciation of the language.”

Now the author of the popular cookbook In Praise of Veg, Alice has begun to re-explore her Georgian heritage – and wants to share it with the world.

“It’s only been in the last few years, particularly since becoming a parent, that I’ve started to want to reconnect with my culture really deeply,” she said.

“The thing that I love the most is that I have included Georgian recipes in In Praise of Veg. I’m really proud of that.”

Food has also been the gateway for Alice to share her culture and experiences with those around her, and she encourages others to do the same.

“I’ve always used food to connect with people… have a meal with a person and you’ll be able to understand and empathise with each other much more.”

In Praise of Veg is available now. You can find Alice Zaslavsky on Instagram or her website. 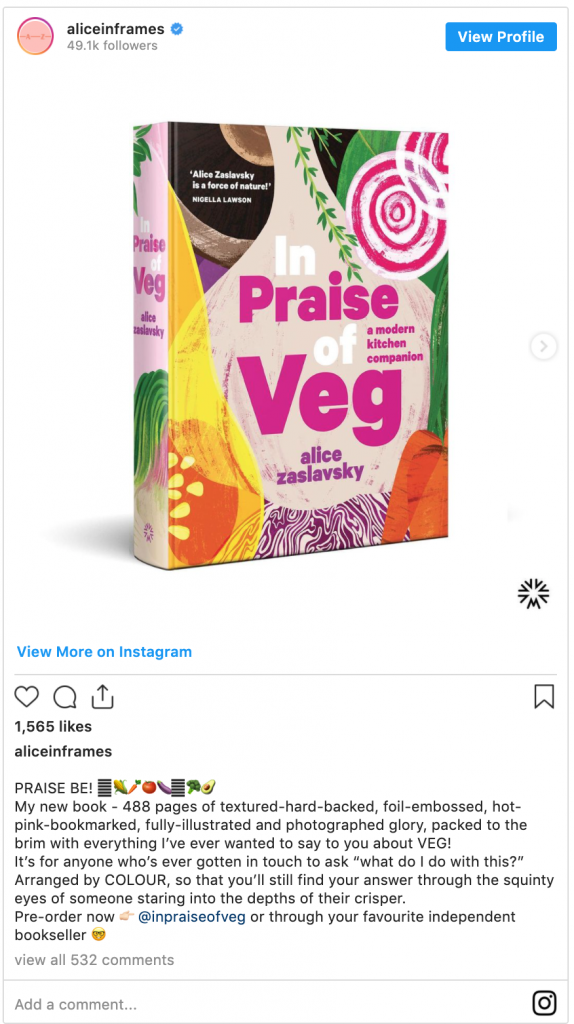 tags: articles culture food hope 103.2
0
previous Have We Moved on From Movie-Going?
next The Cultivation of Character
Related Posts